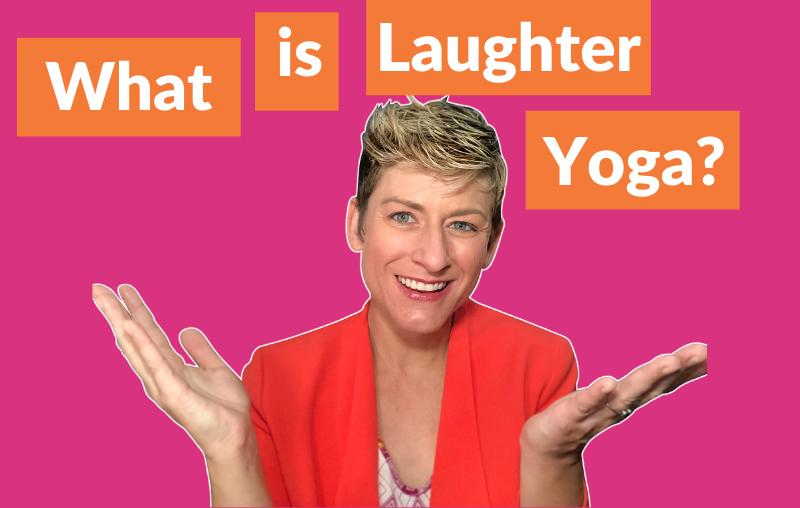 What is Laughter Yoga in 5 Points?

When I tell people that I’m a Certified Laughter Yoga Teacher, they typically respond with the question “What in the world is Laughter Yoga?!” Is that like downward dog while laughing? Are goats involved?

This article answers the question “What is Laughter Yoga” in 5 Points.

Point 1: Laughter Yoga is a health concept in which practically anyone can laugh heartily without jokes, humor, or comedy.

Point 2: The concept is based on scientific evidence that genuine and self-simulated laughter both elicit similar physical and mental health benefits.

Point 3: In Laughter Yoga sessions we initiate laughter as exercise in a group setting. Through eye contact and playful behaviors self-simulated laughter becomes genuine and contagious.

Point 5: Laughter Yoga was established in 1995 by an Indian medical physician and his wife with just five people laughing in a park.

Laughter Yoga is health concept whereby anyone can laugh without the need of jokes, comedy, or even having a sense of humor. You can start laughing even if you are feeling sad, angry, depressed, any emotion. As long as you are willing to laugh, you can laugh.

Both self-simulated and genuine laughter are shown to produce beneficial effects similar to aerobic exercise. So whether a person is laughing at something funny or whether they are just going through the motions of a laughter and making laughing sounds on purpose, both are shown to be beneficial.

In Laughter Yoga sessions laughter is initially simulated as a physical exercise while making eye contact with the others in the group and enacting a sense of childlike playfulness.  Participants allow themselves to be playful and while laughing and intentionally making eye contact with other participants. When we see others laughing in an environment of playfulness and with good eye contact, the laughter soon becomes real and contagious.

Laughter Yoga is called Laughter “Yoga” because it combines Laughter Exercises with deep yogic breathing practices known as Pranayama. This brings more oxygen to the body and brain, so we feel more healthy and energetic.

Laughter Yoga was developed by a medical doctor, Madan Kataria, in collaboration with his lovely wife, Madhuri, a yoga teacher. They begin with a just five people laughing in a park in Mumbai, India in 1995. Now there are thousands of Laughter Clubs in over one-hundred countries worldwide.

What Happens in a Laughter Yoga session?

Are you considering trying Laughing Yoga but you’re not sure what to expect in a session? In general, there are five steps of a complete Laughter Yoga session:

This article outlines each of these components of a complete Laughter Yoga session as originally outlined by Dr. Madan Kataria, the founder of the worldwide Laughter Yoga movement.

In order to get the scientifically evidenced benefits of laughter, there are a few requirements.

The first requirement is that we need to laugh continuously for 10-15 minutes. Typical laughter occurs for only a few moments here and there, but this is not adequate to have significant physiological effects. The second requirement is that the deep laughter that engages the diaphragm and abdominal muscles. Loud, deep laughter from the belly may not be acceptable in many social circumstances but at a Laughter Club hearty belly laughter is encouraged. Typical laughter is dependent on circumstances that may happen naturally or not. At Laughter Clubs we laugh deliberately as a choice so you are sure to get your daily dose of laughter.

How Do I Teach Laughter Yoga?

Now you can learn directly from Celeste Greene — Online!